SAGEWING Under the Big Sky 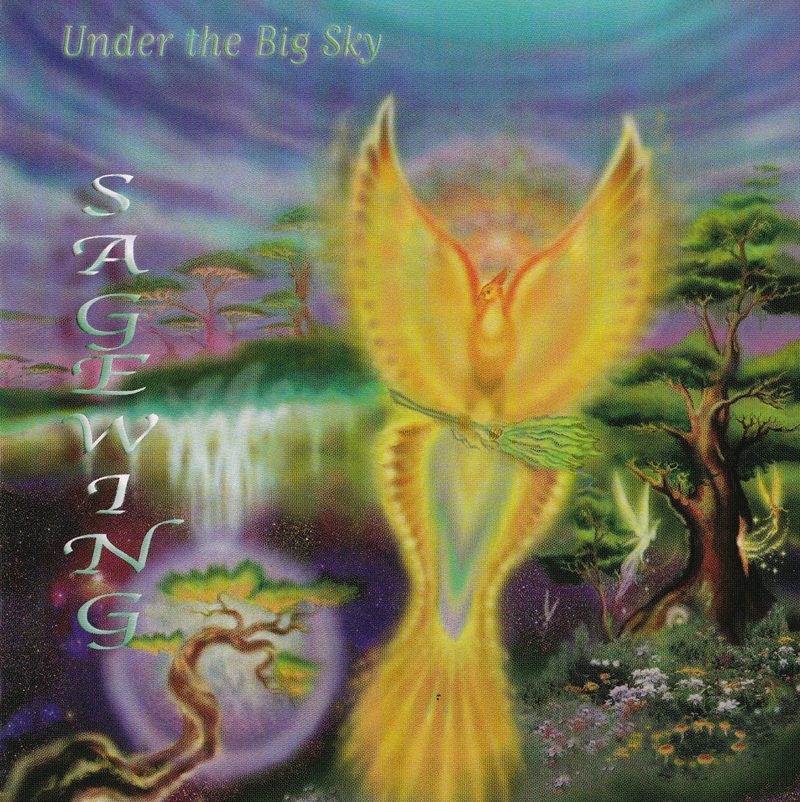 Magic flute and merry voices Sing of earth and sky...

The love of life,

Celebrate your vision one world aligned and full of life...

Streams of music ride forth upon the strings into the soul

All spirits dance together

Dance to remember the prime mover moves everything moves through all through the music, mind and matter to

vibrate with your wings". 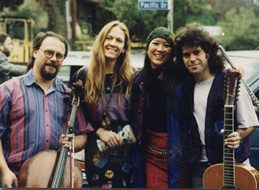 in a folk/rock style.

—centered around concerts that promoted

higher understanding of our connectedness

with all things around us,

and the quest for advancing

awareness and respect for our Mother Earth

Sagewing was selected to kick off the

with 5,000 people listening to

a song that tells us that there should be

more than one day a year to honor our Earth.

On the Earthday Creation CD,

Roger Curley and live recordings by Brian May

who often hosted the band on his radio show

Nature sounds connect the pieces into a journey.

Sagewing has opened for Iron Butterfly at the Roxy,

The Annual Wildflower Show in Malibu,

Concerts for the National Park Service,

the rededication of the Arroyo Seco to

for Brian May and his Malibu Folk Radio show,

television and other radio shows (KPFK and others),

The Amazon and many other outdoor parks and

and countless other venues.

Through their musical messages,

Sagewing has inspired many people to

feel more connected to each other

and to the voices of our planet

Please Enjoy these Musical Sample Highlights!
Contact us Today!
to purchase the Full Versions of our Music

Under the Big Sky

centered around concerts that promoted

Higher understanding of our connectedness

with all things around us,

and the quest for advancing awareness

and respect for our Mother Earth 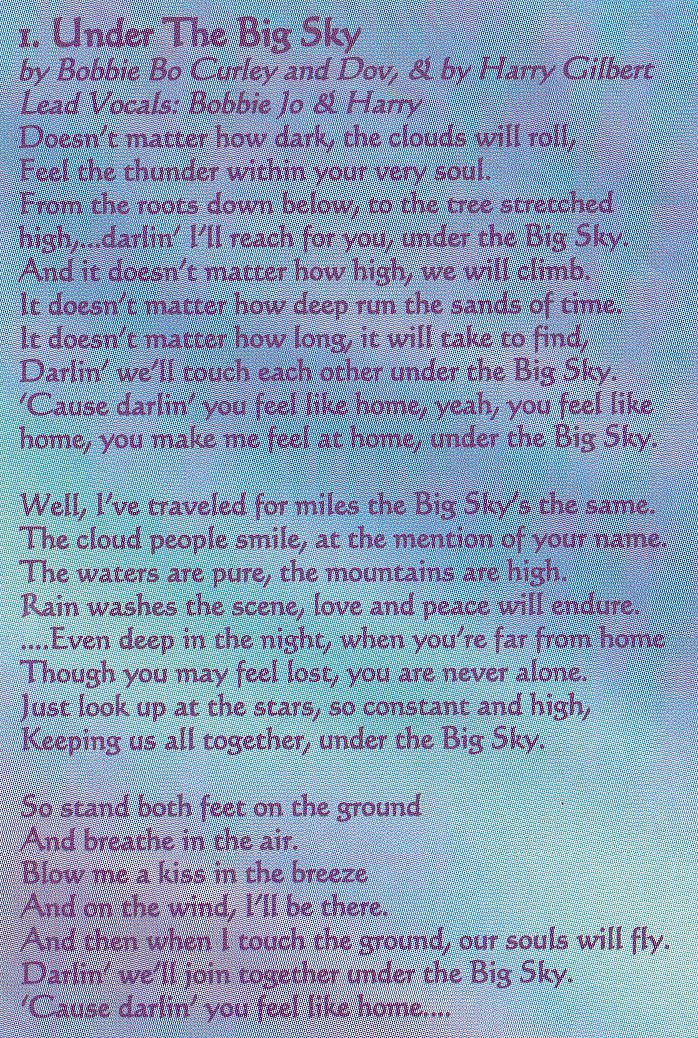 Love Has No Walls

A True Love can be felt across the miles between, 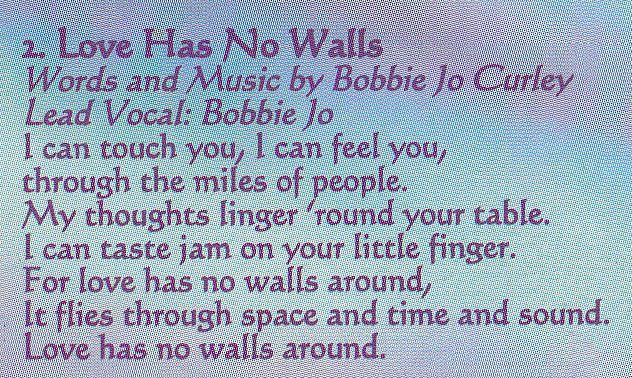 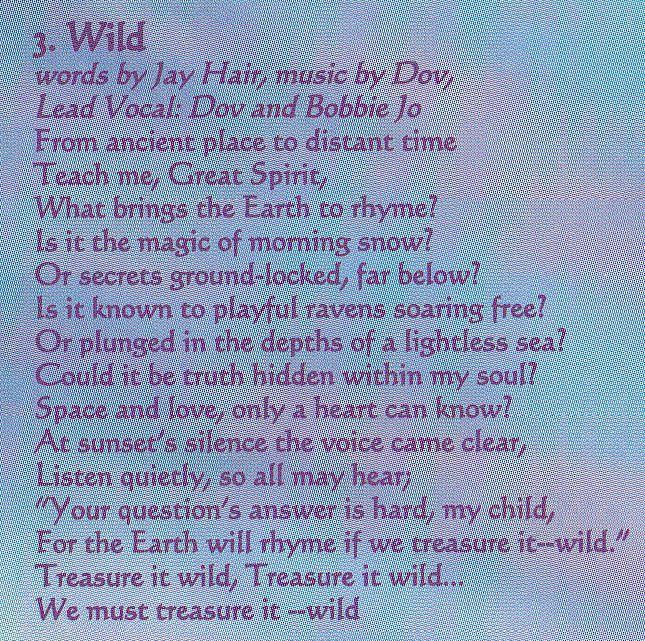 Sagewing’s music is A Genuine product of the

Peaceful forest among the pleasant hills of

...a Transformational blend of chamber instruments

in a folk/rock style

the wonder of our natural world and the

Interconnectedness of all beings…

By planting gardens in our yards instead of grass—

GROW YOUR OWN FOOD!

Protect our streams and water supplies—

La Paz does it!

Replace the asphalt and concrete in our schoolyards with

Choose your products carefully—read the labels!

Is it organic? Local food? A sustainable resource?

Learning the language of music and art—

Bring it back to the schools!!!!

Our dear friend Dov is like a true child of nature

His connection to the Peaceful Splender of Topanga

is revealed in the deep inspirational magic that

flows from this blessed place & into Dov's music.

Dov takes his Topanga roots to his

Hawaiian home away from Topanga 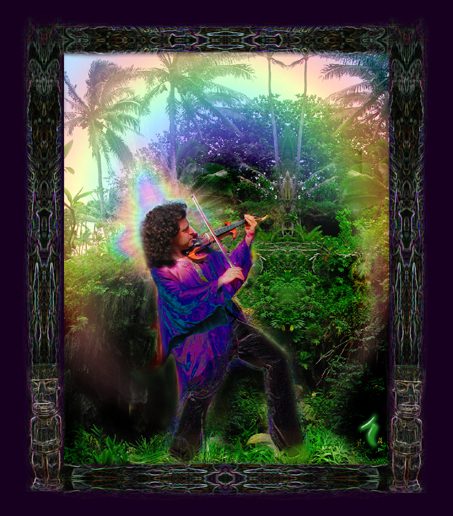 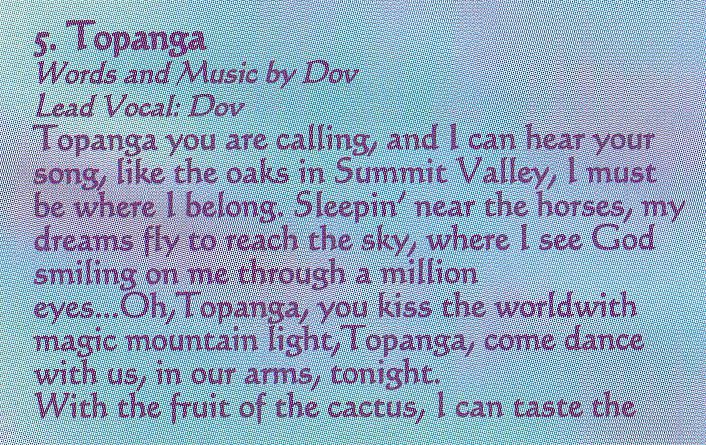 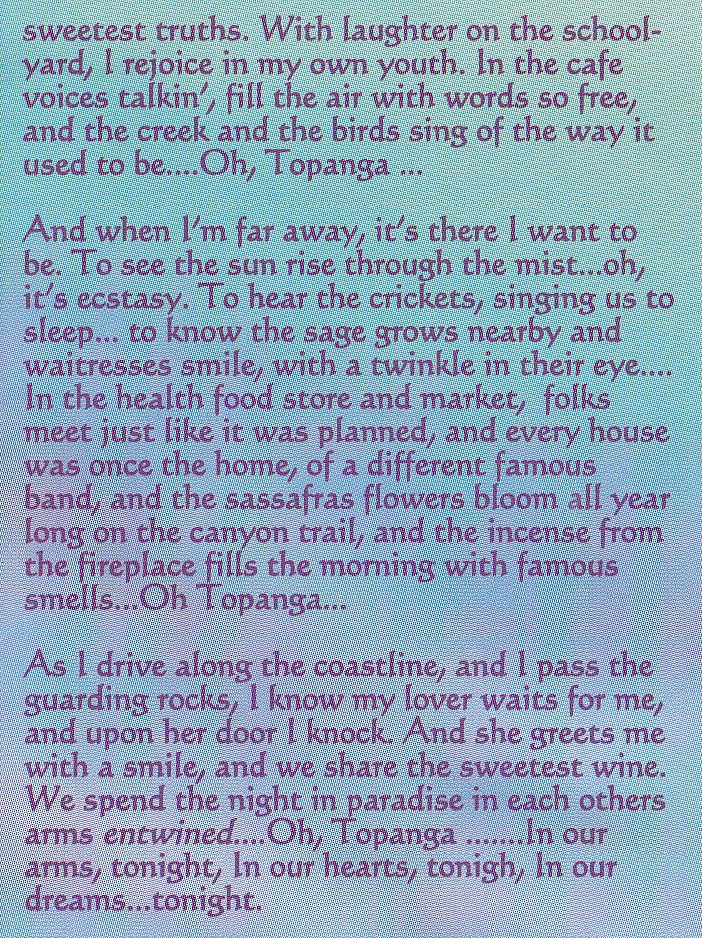 Sagewing is all about saving our

World & all of her resources 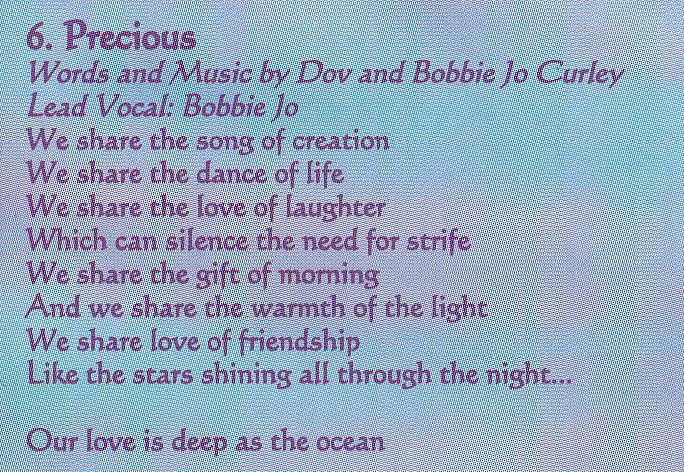 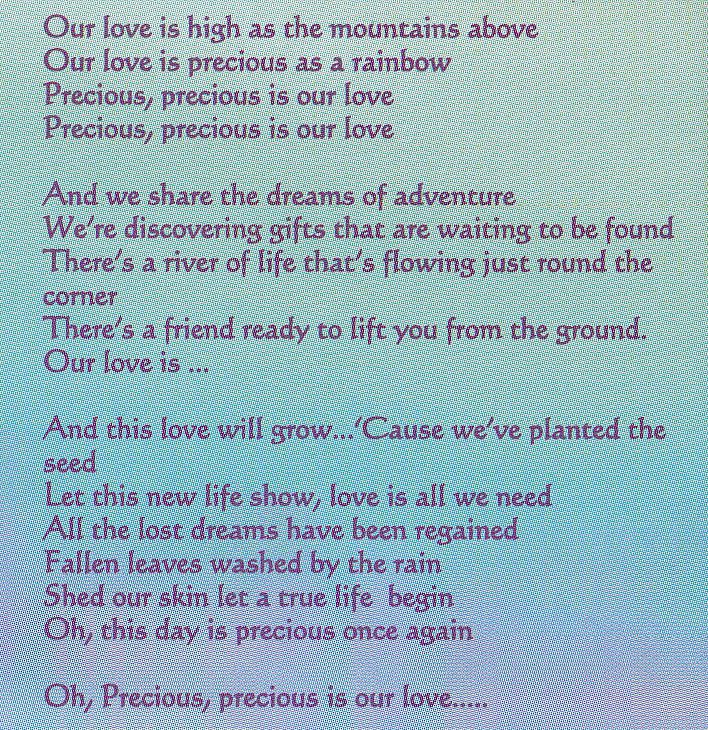 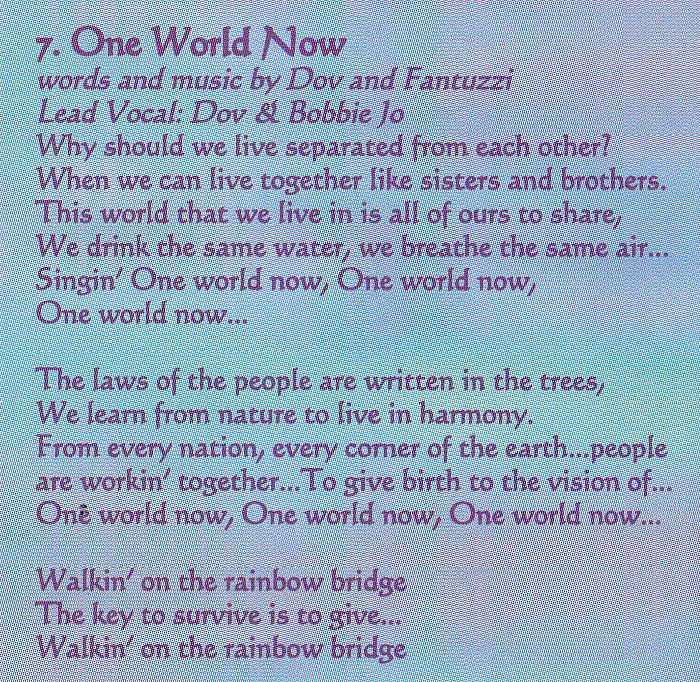 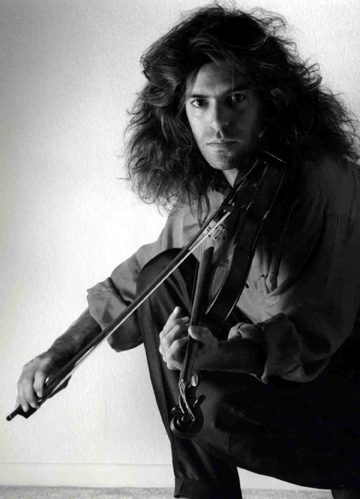 After sailing halfway around the world to the west

then another world passage to the east finds our

good ship & crew in the heart of the Caribbean.

& singin’ in da Reggae Style near the waterfront in

Marina Del Rey while on a bike ride.

Took her card & months later had her come over

that prelude the song.

Magic happened when she got into her part

and soon was making corrections to my phonetics,

she changed a few words around to better

‘be’ in da tropical island vernacular …

I recorded Celay’s vocal arrangements on a new

When we were done tracking her vocals

I mixed them down to the two track-mastering recorder.

in sync with the song…

press play on the 24 track machine & the two track

At best you can only hope to be reasonably Close,

with the first try the vocals landed on an

un-expected ‘up-beat’ and our vocal arrangement of

Listen to this funky feel just after the vocal prelude part &

right when the steel drums intro in the main song.

Celay continues to belt out authentic

Ray McMamara, whom shortly after got a cool gig

Ray is a Cal Arts Grad & his virtuoso performance

on this song really takes you to the

In the Ska tradition I brought together a horn section

that really laid down the slamin horn tracks

followed by Ray on the Steel Drums.

is Charles Hayes of Ike & ‘THE’ Tina Turner fame.

This guys’ got character & so does his sax,

if you listen real carefully near the end

you can hear his pad smacking when levered with gusto…

left it in as part of the magic!

A midi keyboard sample of a real Hammond B-3 organ

was played by Bobbie Jo Curley &

recorded into the midi sequencer computer,

which ran in sync with the smpte time code

on the analog tape.

When the song was beign mixed, the output of the

B3 organ sound was plugged into a real

mic’d in stereo & added to the mix in real time.

While mixing the song & pressed the ‘slow & fast’ buttons

to change the speed of the Rotating Lesley Speakers.

At the end of the song you can clearly hear

the Hammond B3 swirling with all it’s glory

during the fade out 😉

Back To Bobbie Jo's
Musical Offerings